In the article titled ‘Hart’s concept of law’ we discussed the criticism of John Austin’s theory and the internal & external aspect of law given by HLA Hart. In this article, we’ll address the next part of Hart’s Concept of Law, first, what are Primary rules and Secondary rules and second, Law as a Union of Primary and Secondary Rules.

Societies which have not solved these problems are called rudimentary, underdeveloped or primitive societies. Only primary rules are present in such societies. Gradually, they do solve the problems by identifying a second set of rules, i.e. secondary rules which are power conferring.

Secondary rules are of three types:

Rule of Recognition: It allows us to determine the validity of a rule. This helps in identifying which rules should be considered laws. Only the primary rules validated by this rule would create obligations for citizens. They helps in tackling the problem of uncertainty. The valid rules are identified clearly, eliminating any kind of uncertainty.

Rules of Change: These rules empower people to introduce new primary rules and to eliminate old ones. The rules of change may also enable private individuals to create rights and obligations in the form of wills and contracts. These rules help in tackling the static character of primary rules. As they define a set procedure for change, the existing laws can be changed as and when need arises. This way laws will be in consonance with the dynamic society. 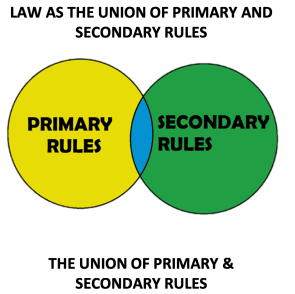 1. How to find legality of primary rules in the absence of secondary rules?

Ans: In a rudimentary legal system, the fact of violence would give justification to a primary rule. This means in case of breach of a social rule, if the society takes certain violent actions then the rule is valid. According to Hart, violence is creating as well as enforcing laws.

2. Law & Morality: Is a law devoid of moral content, a valid law?

Ans: Hart opines that immoral law is a law but there is no obligation to obey such law. He believes that morality is a very important dimension of human life but if morality is confused with law, it would undermine the force of morality. It should be used to judge the quality of a law and not the legality of the law. Hart believes that there can be both good and bad law. If immoral law is no law, then there can be no bad law.

[This blog is authored by Abhinav Gupta, III year student at National Law University, Jodhpur under the guidance of Professor S.K. Kaushik].

This site uses Akismet to reduce spam. Learn how your comment data is processed.